AN OVERVIEW OF THE PHYSICAL DEVELOPMENT OF
ALL SAINTS CHURCH

The foundation stone of the initial  All Saints Church building in its present location at Abakaliki Road Enugu known as European Church was laid during the colonial era on April 4, 1956 by the late Dr Akanu Ibiam, who was then the Governor of Eastern Region and Knight of the British Empire. Rev Walter Willet was the first Chaplain and was later succeeded by Rev T.B Fyffe in 1960. Rev Fyffe built and became Manager of All Saints School, now Ekulu Primary School.

All Saints Church was under the Diocese on the Niger and was formally dedicated by the Late Most Rev. Cecil, John Patterson who was then the Bishop on the Niger and later Archbishop of West Africa. This first church was built to accommodate a maximum of 150 worshippers including 30 choristers. Worshippers at that time included Anglicans, Methodists and Presbyterians.

Because of rapid growth in number of worshippers after the civil war in 1970, the problem of expanding the church became a pressing necessity. Consequently, phases 1 and II expansion of the church were embarked upon during the chaplaincy of Rev Canon John C. Okparaocha between 1970 and 1975 and successfully completed in 1975.

The Rev.  Canon C.A.E. Mbachu, now late Ven. C.A.E. Mbachu became the Third Superintendent of All Saints Church, GRA., Enugu, in September 1981. It was a period of consolidation, expansion and increase in membership.

The following significant developments took place during that period:

1. The building of the Parsonage was fully completed and occupied; the compound fenced round and the car park was tarred.

2. The Church Hall was built. It contained Offices, Junior Staff Quarters, Conference Room while the hall upstairs was used for children’s service and for other social gatherings.

3. Phases III and IV of the Church expansion were carried out thereby leading to increased capacity, Phase IV deserves special mention; because of the extra accommodation it provided in the chancel and for the choir. This led to the second hosting of the Synod of the Diocese of Enugu in the Church from 26th to 29th of May 1990.

4. Evangelism was pursued vigorously. Following the elevation of the Church to an Archdeaconry Headquarters on 1st September, 1985, more churches were established and grouped in order to facilitate their subsequent attainment of Parish Status. The new churches planted are as follows: 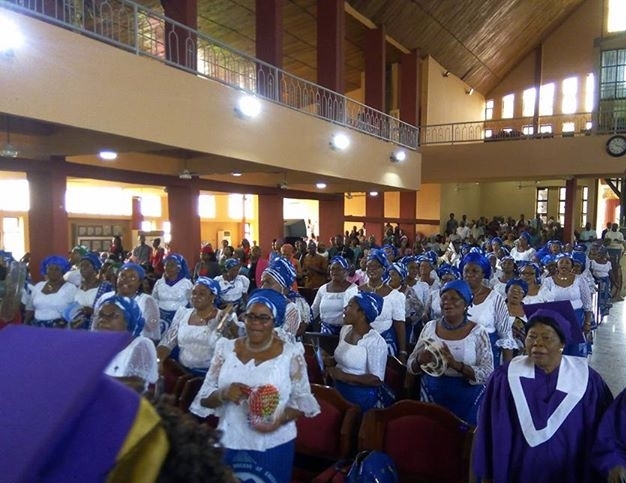 5. All Saints Church, Ezillo, in the Diocese of Abakaliki was also established.

6. The building of a Holy Park for relaxation and a podium for crusades in the Church Compound.

After the splitting of the old Anambra State into Enugu and Anambra States, many people started work in Anambra State but most of them retained accommodations in Enugu and went to work in Anambra State from Enugu. In addition, very many Enugu State indigenes moved from villages to Enugu town resulting in increased population of Enugu town. This affected the churches including All Saints Church, Because of this growth in population, phase V expansion was embarked upon and flagged off with a dedication service on Sunday, November 19, 1995 for the purpose of providing accommodation for the increased number of worshippers. This phase was completed in June 1999 and the church was again used for the 1999 synod.

In addition to the enlarged ground floor spaces in this phase, gallery floor spaces were added by the architect, Mcanto Madubuko Associates both to the North and South with office spaces and sanitary facilities over the vestry for PRIESTS and for the CHORISTERS as in PHASE FOUR.

Phase VI commenced in 2002 to envelope and replace the phase 2 expansion and pull down the phase I Tower block. The Tower which commenced in 2003 but later suspended was completed in 2007 and regarded as phase 7.

Owing to the phased construction and very low pitch of the roof, leakages developed and worsened with time leading to huge expenditure in maintaining the roof on yearly bases. The roof leakages kept increasing with time and became an embarrassment to Worshippers, even tiles at the Altar were falling off which was dangerous to the lives of the Priests in the Altar.

At the instance of the Building Committee Chairman Sir Engr. Dr. Victor Chiwuzie, during the tenure of Ven. Davidson Udodi as the Archdeacon/Vicar, between 2009 - 2013, the Parish Church Council (PCC) eventually agreed that there was inevitable need to re-roof the church not only to check the huge annual expenditure in maintaining leakages at various sections of the church but also to sanitize and coordinate the works done at various phases and improve the aesthetics of both the roof and the entire church building.

Based on this, Arc. Martin Obi was commissioned to do the drawing, this drawing was presented to the P.C.C and approved but work could not commence. Meanwhile the design pictures and models & 3-D were displayed to allow comments and inputs from members.
On the arrival of the Ven. Dr. Honest Uche Gad-Nwosu as the Vicar, he saw the need for the project to be embarked upon, to which, the Parish Church council gave approval. Then the committee approached the Archbishop for his approval with the assurance that activities of the church would not be disrupted during the reconstruction. The Archbishop gave his fatherly consent. The congregation was informed calling for contract tenders. It was at that, that late Arch. Chijioke sent a petition objecting to the approved design.

As a result the Building Committee put the contract on hold for about four months so as to re -visit the architectural design. Reactions were again invited from all interested church members particularly architects and engineers to comment on the design even though over five months were earlier allowed soon after the approved design for comments on the drawings, the model and  3 – D, all of which were earlier displayed by the Building Committee inside the church. Alternative designs were made by a group of All Saints Church Architects who formed a unit called church design consortium specifically for this project led by Arch. Megwalu.

All the alternative designs were critically reviewed by architects and engineers of All Saints Church. After about five months, it was mutually agreed by all that construction work should continue with some amendments to the earlier approval design made by Arc. Obi of Talent Design Associates. Arc. Martin Obi brought out the final design and the contract for the re-roofing was awarded in August, 2014.

Unfortunately when dismantling of the existing roof began in January 2015, the heavy steel trusses damaged the existing ceiling severely and affected adversely the marble altar table, the lectern, the communion rail, pulpit, parts of the ceramic floor tiles, electrical works as well as some windows. It was also discovered that many of the wooden ceiling battens had been badly damaged. The scope of the work consequently increased beyond expectations.

There was no option than to remove not only the existing roof but also the ceiling.
Worshippers became exposed to open air and could look up to the sky. Construction works lingered up to the middle of rainy season due to delays caused by various factors as the entire church had no roof. The feeling of the Building Committee and members can never be reasonably imagined. Just at this point in time Government of Enugu State imposed a STOP WORK ORDER in 2015 and threatened to demolish the entire church building unless approved drawings were produced. This delayed the project for nearly eight months. Contract for the ceiling was awarded in July 2016. The ceiling contractor held the work to ransom for over seven months. Sometimes work was abandoned for several weeks.
In this confusion, there was no option than to appeal to God through intercessory prayers believing that what we cannot get standing on our toes we can always achieve down on our knees. 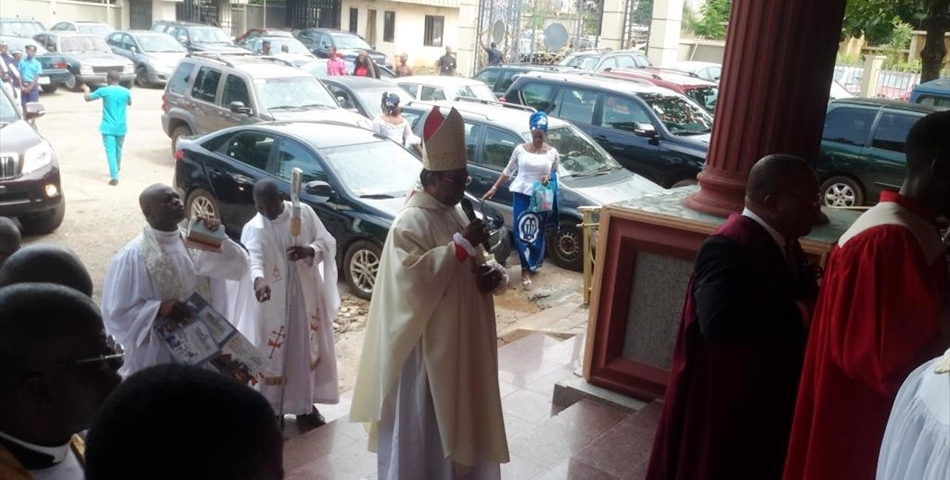 The Holy Spirit took over the problems and testimonies began to emerge. Despite the heavy rains, church worship and activities were never disrupted, as rain never fell inside or on the environs of All Saints premises throughout the construction period while programme were on. On a certain day it was raining heavily from ninth mile up to the first fly over at Enugu but at All Saints premises it was found that there was no rain at all. Concerning the STOP WORK ORDER it was revealed during intercessory prayers that the Egyptians we see today we shall see them no more and forever. Few months after that, a new and more friendly government came into power and the issue of STOP WORK ORDER became a thing of the past.

We note also with delight that during this period other projects were done alongside: (1) The gate to the premises was expanded, courtesy – the family of Sir Chudi & Lady Chinwe Nzegwu in memory of their late son, (2) The offices were reshaped and changed in out-look with the conference hall (3) The church hall was reroofed and re-ceiled and refurbished.
At the same time, church building and parsonage projects were going on at (a) His Grace Anglican Church, Mburubu now roofed, (b) All Saints’ Church Akegb-Ugwu, parsonage completed and church building nearing completion (c) Chapel Building at Ekulu Residence almost completed.

As we thank God for his mercies and answered prayers, we thank His Grace, the Archbishop of Enugu Ecclesiastical province, the Most Rev. Dr. E.O. Chukwuma OON for giving us the approval to embark upon the project, and being there for us through the challenges. We appreciate Mama Enugu province Dr. Mrs. Joyce Chukwuma (Diamond Mummy) who was also there for us in support.

We also thank the Vicar and Archdeacon of Enugu West Archdeaconry, The Ven. Dr. Honest Uche Gad – Nwosu for his courage in starting the work and his total commitment and enthusiasm all through the duration of the project. We also acknowledge the support of the clergy and their wives who were part of this project; Rev. & Mrs. Sam Nwankwo, Rev. & Mrs. Chijioke Udeh, Rev. & Mrs. Chris Ononiwu, Rev. & Mrs. Francis Ojukwu; Rev. Canon & Mrs. A.C. Ojiako, Rev. & Mrs. Felix Ononiwu and Rev. & Mrs. Chibuikem Amaefuna. It is worthy to mention that there was no formal launching for funds for the project and no fund raising committee for the works. We did not seek for financial support outside All Saints Church. All the money spent, on the project came voluntarily from the pockets of members of All Saints Church including the clergy without approaching anybody for special assistance or support. We are immensely grateful to all members of All Saints Church for their voluntary financial and material contributions, patience during the period of delays and discomforts during worships. Members neither abandoned the church when the church building turned into a construction site nor complained bitterly about protracted delays. Thank you very much and May God bless your hearts in the name of the Lord.

It is hoped that All Saints Church will no longer be rebuilt again, rather, only maintenance works may continue and satellite churches may be established to ease future population growth as necessary.